To bring you up to speed since my last post: the problem is not fixed. Today is the eighth day. Each day's high point has been one of two things: me bucketing out all of the tub water (from my upstairs neighbor and possibly from the washer located in the basement... because there's just so much, water. WHERE is it coming from?) -- I digress -- or the bathtub filling and then overflowing, which requires me to first mop up a bunch of water and then empty the tub bucket by bucket.

The flooding and bucketing have happened no less than five times each. Sometimes doing several of these events in one day (aka laundry day) and then going one whole day with neither activity. It's a vicious and suck ass circle. Because folks, let me tell you that eight days without a shower, it fucking sucks. Pardon the eff word and all, but I'm going to just throw that out there.

*Note: Since stopping MySelf Portraits, I use my phone's camera a lot. The quality is super crappy. Also, this is my tub filled with The Water.

Wednesday: Tub filled and overflowed, twice in the morning and once in the afternoon. No plumber came. My landlord wouldn't return my calls. In between the overflows I was bucketing and mopping.

Thursday aka Thanksgiving: Tub filled and overflowed. I bucketed and mopped. My landlord still had not called me. I was supposed to be in Kentucky, man.

Friday: Landlord still wouldn't call me. I tracked down numbers for two other dudes. In the afternoon the one guy finally calls me back with a brilliant excuse: Sorry I haven't returned your calls, my child has swine flu.

Fucking Swine Flu? And this means you, you didn't have access to your cell phone - which I called several times - for the past few days? Swine Flu. Really.

Still Friday. A younger plumber guy showed up (he kept calling me 'Miss') (I realize that has nothing to do with anything, but I feel it's worth noting) and within minutes explains that he needs to knock a hole in my bedroom wall. Before he leaves, I ask if anyone came on Wednesday and he said, "I did. But they didn't tell me there was a problem in your apartment. They said the main line was messed up, so I never even came in the building." OhMyEffinG.

Still Friday, but now it's late in the evening. The guy who fixed my furnace a few months ago, he calls me in a drunken state and says he wants to come over around 9 to work on my plumbing. When I tell him Friday isn't good, he says he might call me to come out Saturday evening or night. Whew. Whatever.

Saturday: Bathroom flood. Two averted floods. A two-hour bike ride followed by a whore bath. Fucking thanks, guys. I stay home, work on my mosaic, scoop tubfulls of water here and there, and then suddenly it's 8:15. That dude calls, again, sounding all drunk, again, wanting to come over around 9pm to work on my plumbing. I don't think so. I hurried up and locked my doors, turned all my lights off, brushed my teeth and got in bed. He called back once but I didn't answer.

Sunday: Two averted floods. Bucketing and whatnot. I call the late-night plumber and he chastises me for not letting him come over last night when his van was all packed up and ready. I wasn't sure how to politely explain I was uncomfortable with a late night visit. 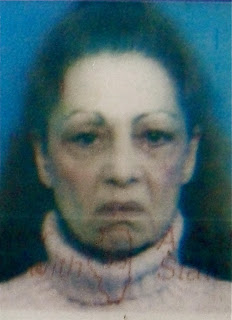 Monday: The one guy who was avoiding my calls, who's daughter had swine flu. I just happened to be home for lunch when he was visiting the neighbors across the hall. I opened my door and he says, "Hey, Jeannette, I bet you're glad to get that plumbing problem all taken care of." All taken care of? You're kidding, right? Come look at my tub. Blah blah blah, excuses.

That afternoon a new plumber shows up. He doesn't have a key so I have to come home from work to let him in. He has no idea he needed to cut a hole in my wall, so no plumbing progress happens. But then . . . I found this picture of my mean neighbor, Thelma.

Tuesday: Plumber dude shows up at five. I get to see what's brewing in the empty apartment below me. He works on my drain for about an hour and a half, knocks a hole in my bedroom wall and doesn't plug it up (it smells wonderful, by the way), and then says he's not sure if my plumbing is permanently or temporarily fixed. Now I get to scrub my tub a zillion times over so I can test it out with a shower tonight. Yeah.

But, whoa, did you see my neighbor? The real life photo captures her emotion much better. I'm going to make it into a fridge magnet.