Back in May of 2010 I had an idea which compelled me to start a second blog, Four Day Vegan, and you can follow that link to see what a blog looks like in its naked and virgin state. 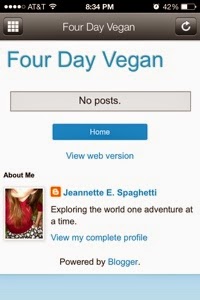 See what I mean? Untouched. No posts.

I was surprised to learn that I've been contemplating the same idea since 2010: eat a plant-based diet for ninety days. (Subtitled: And document something every fourth day, because, I believe that I will spend 4-5 hours in the kitchen on Wednesdays and then again on either Saturday or Sunday depending on what sort of plans that might come up each weekend, and, that should leave me with about two minutes of kitchen time on each of the other five days a week.)

The holdup? My undying love for and obsession with cheese has made me not want to not eat cheese for a whole three months. And I'm formally stating my cheese boycott now because I'm a pretty big deal on this blog this is a blog about whatever. 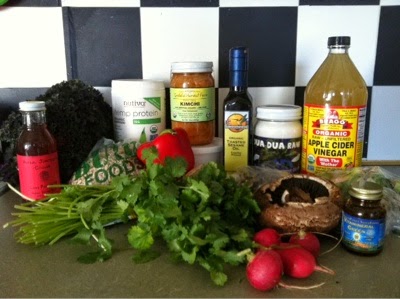 Imagining myself adhere to such food restrictions felt daunting, but after some coaching from Dogfood, I now know how to make sunbutter. And I can chop up a bunch of vegetables, then mix them with kimchi. And lastly, I can throw a variety of things into this particular Ninja and then drink or eat whatever concoction I create.

In the last three days alone, I've consumed a bunch of purple kale, a red pepper, yellow pepper, red onion, half a bunch of green onions, half a bunch of cilantro, a pint of red/orange/yellow cherry tomatoes, raspberries, some soy yogurt, a 16oz jar of kimchi, at least a cup of sunflower seeds, a third or more of a jar of almond butter, some oatmeal, flax meal, hemp protein. Geez this blog post is dragging on forever. Bye.

Filed Under Blogging, Food, Life in Oregon, Taboo, The Following is not a Paid Advertisement - but it can be