Two loads of laundry, one carry on

I've traveled a lot and have packing down to a science. The photos below were taken a month ago, as I prepped for six days in California, touring produce distributors (cold), farms (mud), attending EcoFarm (casual wear), a lot of outdoor walking from class to class (rain, comfy shoes), visiting the beach (another shoe requirement), plus evening wear for several fancy dinners - a lot of different scenarios to prepare for.

Layer One:
Socks, panties, bras, anything that I don't want on a hanger and shoes stuffed with some of those items. I packed four pair of shoes, wore one set. 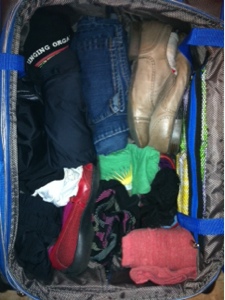 Layer Two:
A jacket that separates the top and bottom layer. 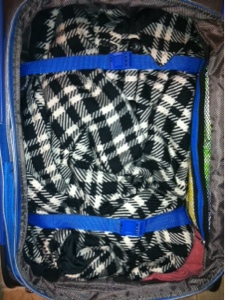 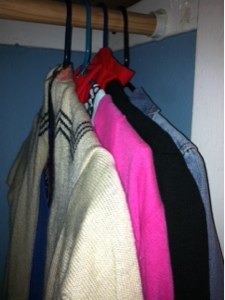 Layer Three.
Grab those four hangers like you would when removing them from the closet and, as neatly as possible, roll them up and put them in the suitcase.

Stuff in the edges of your clothes roll, then stuff in hats, scarves, purses or whatever.

The bag on top of everything has eyeshadow, mascara and jewelry & hair accessories. 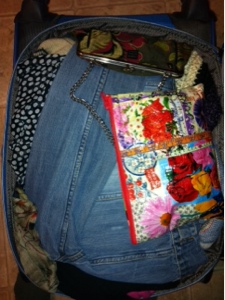 It really was two loads of clothes!

When I returned from this trip, I washed only the clothes I brought and it was two full loads.

Not to mention I brought the entire population of Tampon City. 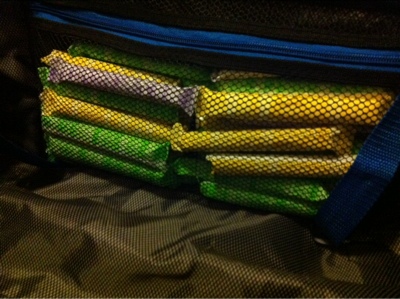 Because I'm busy taking off my shoes, necklaces, coat and getting out my laptop and phone, and trying to quickly do all this while making a tub-train of those items in the five different tubs required plus my suitcase for the x-ray machine, I usually forget to take my clear plastic bag of liquids in 4oz or smaller bottles to put them in a sixth tub.

I've never been stopped for it and so now I leave them in my suitcase in an easy to access spot in case someone asks me to pull them out.

Oh, and I also fit everything in my suitcase with it collapsed down to its smallest size. That way, on the return trip I have a little breathing room to bring everything back disorganized.
The time is now 9:18 PM

Filed Under The Following is not a Paid Advertisement - but it can be, Travel